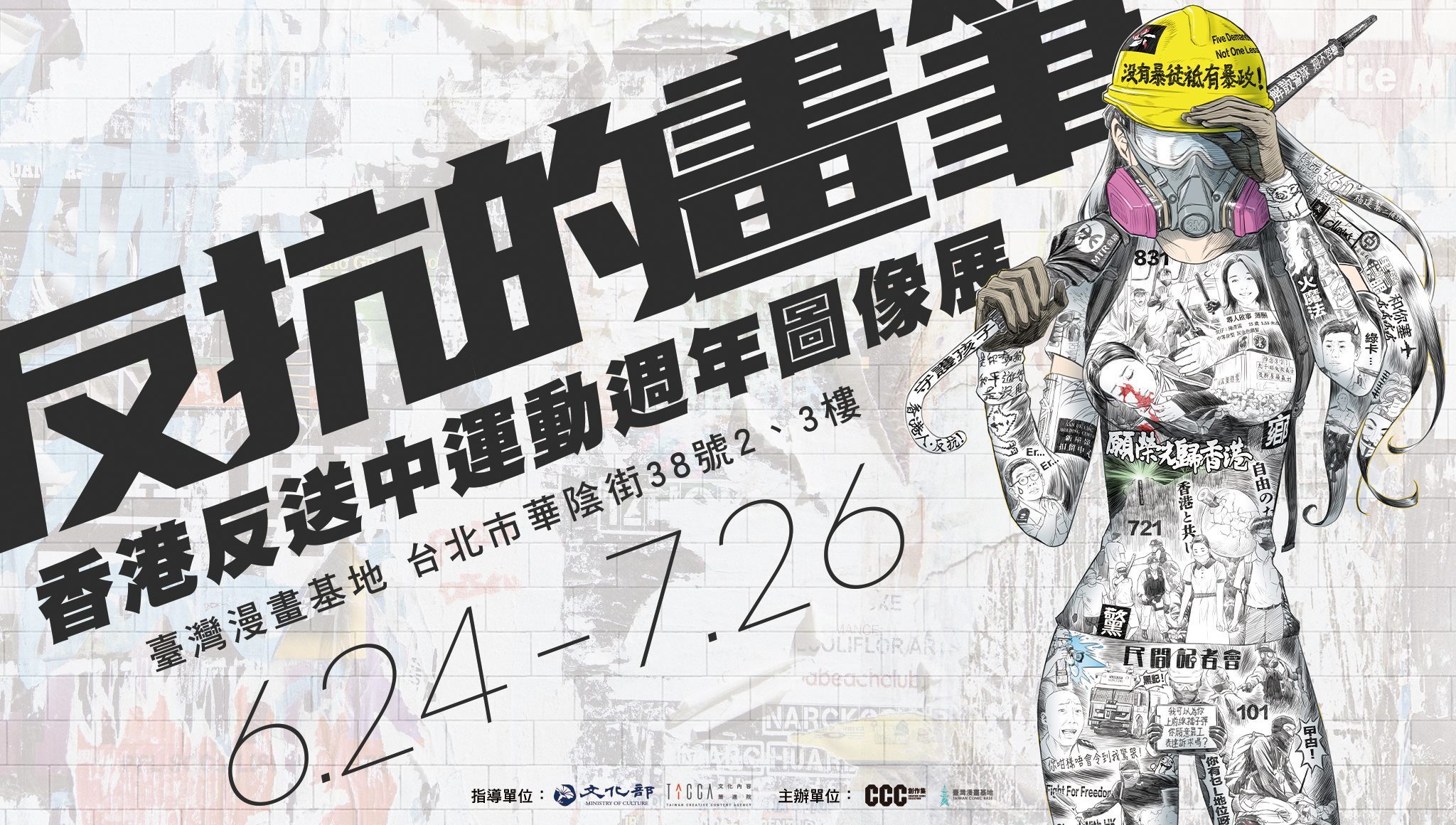 Images often play an important role in social or resistance movements, for simple images and easy-to-understand slogans are highly effective communication tools. In the early summer of 2019, a large-scale social movement against the Anti-Extradition Law Amendment Bill Movement erupted in Hong Kong. This was known as the Anti-ELAB Movement in Taiwan. But as early as the beginning of 2019, Hong Kong society began to discuss the Extradition Law amid worries that passing the law would make it possible and easy to send Hong Kong residents to China for trial.

On June 9, 2019, millions of Hong Kong residents took to the streets. As if a match had been dropped in a haystack, the Anti-ELAB Movement began to spread like wildfire, and the political landscape was completely redrawn during the elections for the Hong Kong district councils. Compared with the Umbrella Movement in 2014, the actions derived from the Anti-ELAB Movement were more diverse. While the Valiant fought on the frontline, The Peaceful, Reasonable, and Non-Violent resisted through demonstrations, holding hands, forming human chains, placing crowdfunding advertisements, and supporting yellow shops, making their demands heard.

The Anti-ELAB Movement is still in process. In a leaderless movement, delivering messages quickly and effectively is essential to calling on people to take to the streets and participate in action. The Internet became the main arteries for the movement. It was not easy to spread thousands of texts in image formats through Telegram, LIHKG, IG, FB and other platforms to connect people in the movement.

At first, the images were mostly calls for action, circulation of demands, etc., but as the movement unfolded, conflicts between the police and the public intensified, and so the works of Hong Kong artists began to change as well and started to include recording events, expressing moods, looking to the future, encouraging one another, etc. The birth of mini-zines and other publications created a long and unending record that enables us to understand the progress of the movement and the changes in artists’ moods.

Visual art works were blossoming all across the battlefield. Online works were posted on street walls, and even the Lennon Walls evolved. With its Lennon Walls, post-it notes, image walls, and huge posters, Hong Kong seemed to have become an open-air art gallery. During the Three Strikes (no work, no class, no markets), Hong Kong artists joined the strike, took to the streets, and organized labor unions—because they knew better than anyone how precious creative freedom is.

On the first anniversary of the Anti-ELAB Movement, this special exhibition titled Brushes of Resistance – One-Year Anniversary Exhibition of Imagery from the Hong Kong Anti-ELAB Movement features over 100 works from 66 creators from Hong Kong, Taiwan, and South Korea. Brushes of Resistance builds on this concept, by giving this Hong Kong resistance art a space in Taiwan and reproducing a Lennon Wall. Through these images, we can understand how these artists used their pens and brushes to record history, and what they left behind for the rest of the world when looking back to this crucial period in Hong Kong’s history.

The Freedom High! Hong Kong Social Movement Chronicles Exhibition and the Yellow Objects Poster Exhibition to display the publications created by the movement. The VR reality game area enables viewers to try to feel the scenes of confrontation with the Hong Kong police on the streets of Hong Kong. This exhibition also collaborates with the Hong Kong Spring international online comic exhibition from South Korea, which takes comics from there to this exhibition venue in Taiwan. In a reference to Korean culture, some of the works are presented on scrolls.

Hong Kong's visual arts are blossoming on the many Lennon walls and in street graffiti tags. Even when torn off, destroyed, or erased, the sentiments conveyed and the history portrayed have traversed the seas to distant places and will never disappear.

The main visual of the exhibition "Valiant Woman" was created by Hong Kong artist Kai Lan Egg. In the Anti-ELAB Movement, this work was widely spread and even printed as a banner several meters tall, turning into an iconic work at Kwai Fong metro station. Drawing inspiration from “Heisei Mary” by Japanese painter Shohei Otomi, the artist created a highly original work. The patterns on the woman’s body, resembling tattoos, refer to real events in the Anti-ELAB Movement.

The second floor of the exhibition themed "Do you hear the people sing?" mimics an underground passage of the Kwai Fong metro station in Hong Kong and guides visitors through an underground Lennon Wall. Most of the works in this area are faces of common people in the resistance, from The Valiant, a confrontational group in the frontline to the Peaceful, Reasonable, and Non-Violent, a group that supported softer actions. This area also includes a good number of works by Taiwanese creators, some of which come from the Open Your Left Eye - Support Hong Kong with Taiwanese Illustrations with works gathered online by PETIT DEER CINEMA.

Statistics from Hong Kong scholars show that, from June to November 2019, 3 million Hong Kong residents participated in the Hong Kong Anti-ELAB Movement, which included 50 parades of more than 10,000 people. Most of these faces are ordinary citizens, especially on June 16, 2019, when 2 million people from all walks of life and all ages took to the streets.

The Anti-ELAB Movement has also attracted international attention. Taiwan is arguably the society with the strongest support for the people in Hong Kong. Many Taiwanese university campuses, independent bookstores, cafes, etc. had their Lennon Walls. Even when a sea apart, Taiwanese creators have picked up their pens and brushes to create works in support of Hong Kong.

On the third floor, the main themes will be "Hong Kong – untouched for 50 years?" and "No thugs, just tyranny." Commenting on the incidents around the Hong Kong Police Headquarters and the Prince Edward metro station. Several political cartoonists depict the relations between the Chinese authorities and the Hong Kong Chief Executive. The police violence against the Anti-ELAB Movement that drew so much attention in the international media, can also be viewed here. As the movement heated up, the emotions of Hong Kong artists became stronger as well, expressing disgust at the police violence, generational conflict, etc. These issues will be all on display at the exhibition.

But amid despair, there’s hope. From 2019 to 2020, the protesters were forcefully defending freedom. The exhibition ends with "Hope," and several works show their makers’ expectations and aspirations for Hong Kong.

Hong Kong is no longer what it used to be. The people have looked seriously at the voting ballots in their hands and were no longer indifferent to politics. People adapted their consumer behavior to establish yellow economic circles and stopped visiting Chinese-owned companies in large numbers. What does the future hold in store for Hong Kong? If we go by the drawings and paintings from the troubled territory, people from Hong Kong will still smile in the future, even when behind masks. Perhaps one day the Legislative Council will unequivocally guarantee freedoms and people will be able to remove their masks and look each other in the face.

Topic: Please Like and Share - How did Hong Kong people connect and speak up during their leaderless movement?

Topic: Behind Brushes of Resistance — The power of nonverbal images is changing the world

Topic: This is not an Occupy-type movement – How could young people in Hong Kong upend the existing political landscape?

※The seminars may be attended after registration online; seats are limited. For details, please visit the website of Taiwan Comic Base.